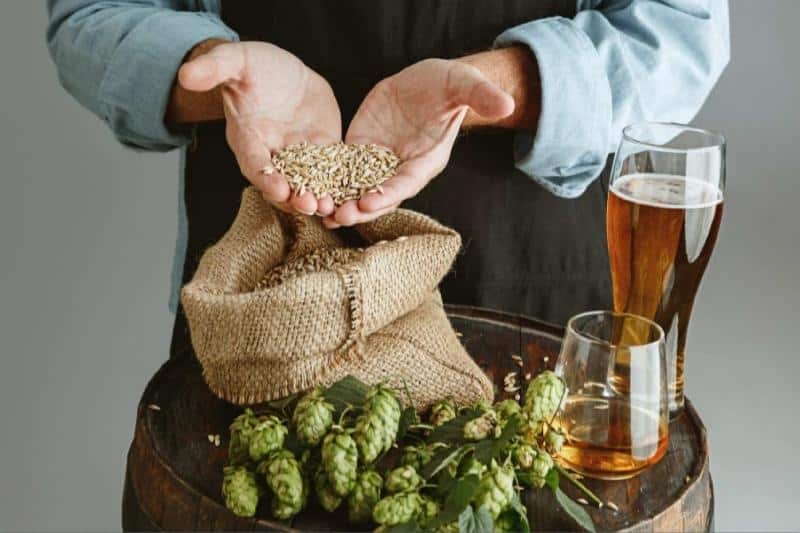 Here’s the official definition of homebrew:

In other words, homebrewing is the brewing of beer, mead, and ciders (can also technically be distilling) on a small scale for personal, non-commercial purposes. Brewing kits (a pre-set of ingredients to make the brewing process easier) and fermenters, for example, can be obtained locally at your local homebrew shop (LHBS). Domestically, alcohol has been brewed from its inception, thousands of years before commercial manufacturing, though its legality has varied depending on local regulations. Homebrewing is closely connected to the hobby of home distilling, which involves making alcoholic spirits for personal consumption; however, home distillation is more strictly regulated and is not permitted in the United States (people still do so regardless), where the product is referred to as moonshine.

For example, a typical beer has these main components:

This guide will be geared towards those who want to brew at home on a small scale. People normally want to brew beer, wine, cider, and some harder distilled drinks. It’s about the passion of getting involved firsthand and creating something on your own. The creative aspect of brewing normally keeps you involved in the hobby due to its amazing options that are only limited by your imagination. A lot of professional brewers that open breweries start as humble homebrewers. This hobby can take you in many directions and create friendships that last a lifetime.

The two main factors of getting into homebrewing are your local homebrew shop and homebrew clubs.

Local homebrew shops should have all the ingredients and basic equipment you need to get started with brewing. They will also be there to help you as you learn and want to brew more exotic styles. The best part is the local expertise and support you will get. You can’t find a service like that online. Some homebrew shops will also have their own events, which include bottle shares. Please don’t forget to help your local shop.

Karp’s Hardware & Homebrew is located in East Northport and was established in 1934. They have been selling brewing supplies for many years and offer good assistance for new brewers. They have a good selection of yeast, hops, and grain. They currently carry Wyeast liquid yeast. I would give them a call to check on its availability.

Kedco Wine Storage Systems is a wine storage system company that also offers brewing and wine-making supplies. They began their venture in 1970 and now have a commercial location in Farmingdale. They even have their own Brews Brothers beer-making kits. The kits have the ingredients needed to make a brew and they have a separate equipment kit to get you started. They currently do not carry liquid yeast, but can special order it.

If you choose you can join a homebrew club to commiserate with fellow brewers and learn more. The clubs normally have monthly meetings at local establishments that love beer. You can also pour your homebrew at local festivals if you gain some skill.

The Brewers East End Revival Homebrew Organization was founded in 1996 and is an American Homebrewers Association-registered club. We now have over 80 members, ranging from homebrewers to all-grain brewers and BJCP judges.

They mainly have members from the middle of the island to out east. What they do:

Handgrenades Homebrew and Craft Beer Club (HHCBC) are located in Nassau County. The club was started by Peter Tripp of the Homebrew and Handgrenades homebrew shop (Closed). Pete is now the head brewer at Brew SA in Freeport, New York.

They’re based in New York and gather every third Tuesday of the month at various craft beer bars, restaurants, and breweries. Their mission:

The Long Island Beer and Malt Enthusiasts (LIBME) objective is to share our craft beer, homebrewing, and malt enjoying expertise and excitement with others. LIBME, a proud member of the American Homebrewers Association, hosts tastings, style studies, lectures with local breweries, and brewing clinics on a regular basis. In addition, they host club socials, beer dinners, and attend local craft beer festivals. Join them on the first Wednesday of each month at 7:30 p.m. to share information, advice, and opinions about the greatest craft beers, where to drink them, and to share our passion for all things beer and malt. Dates and locations of their meetings can be found on their website, Facebook page, and Google Group.

The cost is normally $35 to join a club. You can spend a bit more and join all three Long Island beer clubs.

Please let us know if there should be an update of some type to this guide. You can let us know on the forum.